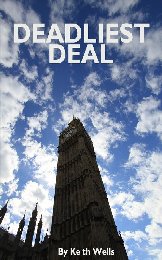 A UK based multi-national steel manufacturing company, in decline over several years fails to restructure and falls into bankruptcy, taking its company pension fund down with it, leaving thousands of long term contributors without a penny.

The CEO is brutally killed at his luxury home on the outskirts of Deal, a quiet coastal town in Kent; a murder investigation begins. Inspector Sean Daley, officer in charge of Deal Police, finds himself at loggerheads with the Senior Investigating Officer (SIO) appointed to investigate the murder.

Within 24 hours two more murders occur. A suspect, an active member of the Pension Victims Action Group (PVAG), an organisation set up to lobby Parliament, is soon arrested.  Daley and the SIO disagree angrily about the suspect’s guilt, so with the assistance of a young female detective he begins an unauthorised investigation, which goes wrong and a Metropolitan Police Detective is taken hostage.

Subtle use of covert technology combined with Daley’s Special Forces skills, which predate his entry to the Police, ensure he and his assistant narrowly escape death; but he must discover why their every move produces near fatal consequences.

Guns, part of a very large shipment stolen from the United States, are discovered during the murder investigation; the FBI become involved demanding control of the investigation, they suspect that Daley is a corrupt cop and part of an organised crime network intending to supply the stolen weapons for criminal use.  To clear himself Daley becomes a fugitive.

A small group of PVAG members conducting their own covert investigation find evidence that the murdered CEO had pocketed millions of pounds(£) from the failed pension fund and that the money was held in secret Bank accounts and a portfolio of property investments; and they want it back. They discover that one of the properties in the portfolio is a derelict farm near Sandwich in Kent, where a local police officer believes illicit drugs are being manufactured.  Joining forces with Daley they take a look and uncover a sinister plot beyond their wildest imaginings.  They have no choice but to confront it.

In a matter of days Daley’s comfortable and happy life has fallen apart, he’s a fugitive, sought by his colleagues, the FBI, and ruthless killers, his family has disappeared, he’s uncovered a murderous conspiracy and every move he makes is betrayed; perhaps most serious for him he’s forced to confront his own dark and deadly past or risk losing his family forever.

Deadliest Deal certainly lives up to its name